Caring about Communication in the Community

The MMO Melting Pot is a new site I came across recently that covers many of the very good works of mmo bloggers around the interwebz, it had a recentish article with a very good thought behind it. It was discussing how the mmo community on a whole really isn’t very engaged and interactive with the various gaming sites and blogs compared to other genres’. The aim here is to open up the community that little bit more with getting more involved in conversing about their favourite genre which is very admirable. While we are all pretty much all Shut-Ins and Sociaphobes (apparently) it is just asking you to branch out, get out from under the metaphorical and literal Doona Blanket of safety and involve yourself and your compadres more in the community. So maybe share along the MMO Melting Pot, your favourite blogs (not encouraging my own of course =p) and encourage them to comment.

It is a funny thing the comment, often before you get to know anyone it can feel a little odd leaving a post, like your some unwelcome stranger whose interactions are worthless and not welcome. Honestly that’s how i first thought. The interesting thoughts i had because of someone’s brilliant post were for naught, which is a shame as they really could have invoked some nice conversation. Your comments wherever you travel will always be welcome, even if you do not exactly agree and especially if you have a diverging viewpoint, it really does brighten our dreary word spams and hopefully will brighten our community. It can create some great discussions as well and who knows maybe meet a few interesting people along the way. So get your comment spam on and fly that mmo freak flag.

Twitter seems to be the tool of the people right now too but it really is quite far out of my comfort zone for now. I made an account and linked it up but that may be the extent of my bird like travels for the mean time. But if you think Twitter is the bee’s knees or Sparrows fart get on there to extend those conversations with the community, and as Captain Picard (>Kirk) says  …. Engage

Sometimes i think the current mmo zeitgeist is to blame for the demise of community ties and interactions. It seems while the genre has moved further towards casual ties and more single player antics that our social nature inside the game and out has begun to dry up, just that little bit. Guilds even seem to be less tangible now, apart from the long established i see many popping up and then crumbling under the pressure, guild hopping has grown as well. Big communities of complete servers or even whole games are no longer forming as much and those long lasting social ties even less so. Many of these games are generally not even conducive to playing together, many mechanics of the current generation just don’t seem to encourage or even support creating social ties as well which is sad for an apparently interactive world.

Azuriel over at In An Age thought in a recent post that the invariable large player pool in our big mmo’s are to blame, like reaching a level of saturation point but instead of water its your usual mmo cretins and miscreants poisoning the rest. With the increased use of looking for group tools the player base has often gotten larger than it really should. I really do understand the pull behind LFD and catering to those of the population who are a tad more time constrained but the mechanics of a game can be worked together to preserve a better sense of accountability and comradery.
Azuriel thinks that due to the increased player pool it adds a feeling of a complete lack of accountability for ones action, killing the community, i think however it is neither the only cause or the main cause of our community concerns. Regardless of the population size SW:ToR had a rather terrible community in terms of grouping, finding enough for heroics was an effort in patience and dungeons took forever, finding a questing partner was so rare so as to be non-existent.. TSW even more so (luckily it is a pretty awesome single player RPG). Funnily enough in the GW2 beta as well, many of areas were decidedly quiet for such a large population, most times it seemed to promote play next too rather than playing with which may have been the issue. This may change later depending on the difficulty of areas but it felt strange, many times when entering a group no one would even say hello and that is all kinds of wrong.

I understand the issue with expanding an available population, you lose that sense of accountability. Regardless though some communities do better and some worse when enacting lfg tools, some communities are bad without anyway. It comes down to the core mechanics in the end and how much group play and co-dependance are promoted. In games promoting social ties communities become more open and tight nit and reputations (for good or bad) are earned far more easily. Player actions can follow them around and honestly that is the best part of a community as it brings out civility and those that stray from the group think are reined in a lot of the time.
Hiding behind the vale in relative anonymity brings out the worst in some and I do agree that attitude if large enough, and left for long enough will poison player behaviors. WoW is a testament to that occurring, but I don’t think it is the only issue. Even after the cross server lfg entered Tera I still witnessed the accountability for players actions popping up on the forums, it is a small and short sample though.

The Main issue i think is always the games mechanics, in essence this comes down to the single player design approach infecting the players with a sense of complacency and aversion to others, gamer empathy is lost. There is often no need to group in terms of difficulty or reward, you may get through content quicker but due to the short period of leveling it really isn’t required. When there is no need to group you really do see less social and civil players, and less people being involved in the community.

This is where Tera got it all perfectly right, after all of the games lately it really promoted group play and encouraged establishing connections. 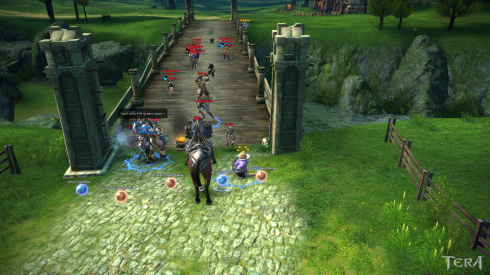 Ganking and the Act of Retaliation – Server Responsibilty in Action

The promotion of group play was extremely evident in the  amount of conversation in game and on the forums, the hive mind was great and during the few weeks of launch it grew. Area chat was always full, the often time irrelevance of the convresation is immaterial though… it was a game that felt alive with it’s inhabitants. Picking up a group just through chat was a breeze through nearly every zone and every lvl and when in a group be it for leveling, bams or a dungeon people talked. Sometimes it was just hi, often times though it extended into conversations about class mechanics, music, movies, or even about your weekend. I also found the community was regularly setting up there own events within their own group as well as between guilds.

Milady over at Hyper Criticism discusses the often toxic nature of the community and I see this just about everywhere, some being worse than others. I think it has gone on so long now in the mainstream that people are genuinely forgetting how to be social. Many talk about being far more restrictive with the chat channels but I believe that would hurt the communities even more then the trolls ever could. You want chat and forums too feel open and less restricted to make people feel comfortable. Restricting language and enforcing courtesy is all well and good but i would much rather some passion to the interaction then being tightly controlled.

Milady says
“Back in the old days, people behaved because they had no other option if they wanted to engage in high-end content. The community could regulate itself by ostrasizing harmful elements such as ninjas, slackers and jerks. And what do we have now? A system that eliminates any rough areas so that we can ignore that we are actually playing side by side with a bunch of jerks! I dissent! People should learn that bad behaviour is not tolerated, not that there is no possibility of behaving bad!”

I like this part, players given the tools to combat the unsavourable elements is how it should be done. I don’t wish to be rid of it all, i encourage a sense of free speech as it tends to make a server more lively and the more conversation the better in terms of building a community. Tera had trolls, BOY ever did Tera have trolls but with that comes a reputation, and with a reputation came the possibility for retribution (friends list made this too easy mwhahaha). You better believe some took out there pound of flesh from the trolls, I myself took the chance to nip back occasionally. One of the Tera devs originally said the goal was for the community to police itself to an extent, with the right mechanics this is indeed possible and in my opinion preferred. This is all not to say i condone sexist, racist or discriminatory practices and there is definitely a time when enough is enough, but whats wrong with adding a little spice into the mix even if it isn’t your personal style. A lively chat in my opinion is always better than a dead one.

Gw2 personlised resources are in no way social either, it ostracizes you away from others as there is no need to be social or even acknowledge other people. Co-dependance can absolute be a great thing for promoting the social aspects of mmo’s and encouraging communication. In Tera (harping on I know) nodes were shareable and as many who could fit around were able to gather it together, whether or not you even had the required skill level. This is true civility, it creates a sense of working together that enriches an environment. It brings out the social nature of mmo’s and encourages communication. Hell even killing someone for a resource or node stealing is more social since you are at least being acknowledged.

I honestly miss the vibrancy of that small Tera community when it first began and will keep looking for it in the next. It really is funny how much simple game mechanics and direction can change the social nature of an mmo into something either quiet or crass. In the end though I would always much rather crass idiots and conflict then complacency. But never mind me as this is just my personal opinion on the matter and I am sure everyone differs on how they like communities promoted and the quality of the conversation.

8 thoughts on “Caring about Communication in the Community”