Final Fantasy and a Preview Reborn

Twas the week before head start, for this little hater

and the servers were groaning under the newest beta;

Sliders and options were fiddled with care,

in the hopes our avatars would induce quite a stare;

The gamers were hunched with their headsets and mice

in the hope that dear god, this mmo would be nice.

Ok enough of that…. As you may or may not have heard an mmo called Final Fantasy 14 (stupid roman numerals) has been reborn. Is it an abomination of the undead that needs its head bashed in with a shovel, or a phoenix risen from the ashes in a blazing glory…probably neither..

Pretty much everything I said in my previous review still applies. It still feels rather ancient in its ideals, is missing key mechanics that are just a standard now and just that general polish we expect from certain areas is missing. The dialogue boxes still annoy the ever-living hell out of me, the questing is still extremely dull, the major cities and zones are still badly planned, and the amusing mute puppet theatre that are the cutscenes are still there. I have seen a few decent improvements like the mob animations but it is still pretty much the same game I hated before.

But for some reason, this time around I’m enjoying myself… ARRR, I am a confused sort at the best of times.

I’ve gotten into that old world groove of picking up quests and going on a mindless rampage across the countryside. The tab targeting and hefty skill bar use is oddly relaxing. The new zone, Limsa Lominsa, that I’m in seems to offer a better questing experience that isn’t so fragmented and that city and area around it are much more to my style. It really is a visual marvel at times.

I really did not like the conjurer class I played last time as it was a complete and utter bore to play, I never got far because of this as I just couldn’t stomach much more of the awful combat. For better or worse combat is a major part of this online worlds and when its bad the whole experience suffers. This time with the Arcanist it all just felt right.

While I like pet classes to an extent I much prefer the magical variety rather than the ranger style and this pet class is truly just perfect. The pet is an extension of yourself in many ways and you have a really extensive collection of commands to use, I was even finding myself moving it around or calling it to heel so it would avoid aoe, I can command it to guard or stay, to use specific skills and all manor of other commands. Also the pet feels tanky enough that it can take hits proficiently but enough that care still needs to be taken, it’s a delicate balance but I think they got that right. Final Fantasy does pet classes perfect…I’m so relieved.

Making it further this time I finally get what the whole job system can achieve and it is a truly remarkable system, it offers a lot of choice but also guidance on how to build your character. It is all very slow to start…too slow at times but it seems that the more you play the more options you have and the more diverse your build becomes. I’m really interested to see where it takes us in the end game dungeons and how it all works in PvP. Should be fun. 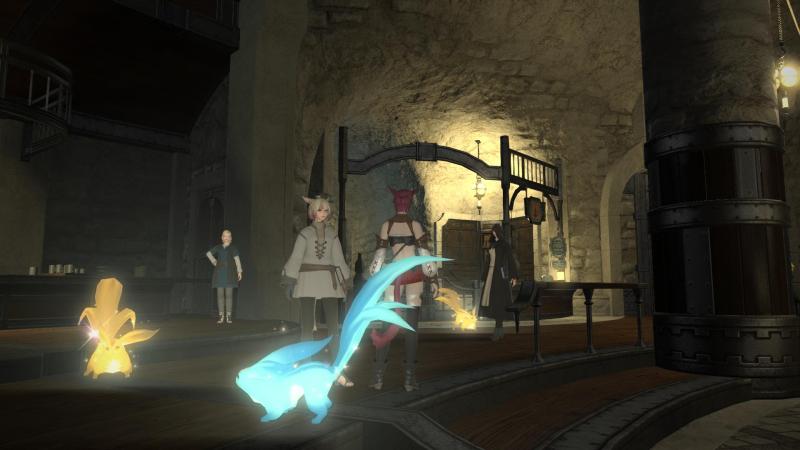 I spent around 5 hours or more just fishing in this open beta. I couldn’t explain why…I’m not even sure myself but there is something so absolutely awesome about this gathering profession. I think it tapped into my inner explorer a little with how you traverse the zones and find rivers, beaches and piers to fish from. The different styles of bait keep you wanting to progress and find different, and bigger fish and how it asks you to pay attention throughout, watching the line for that little tug makes it rather enjoyable to me. It seems I’ve only just scratched the surface too as there are a variety of lures to craft and buy and apparently the moon cycles can play a part in what you’re able to catch. I like to fish in real life as well (and am pretty dang good too) and this was a good virtual representation for those down times in between combat which are just as important to get right. 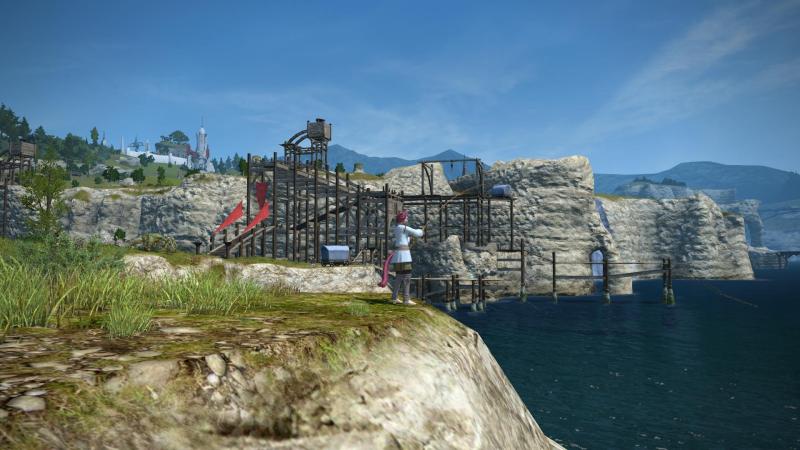 The detail they’ve put into the world really do make it something interesting enough that you want to stay in it longer and see more. The lands, while open seem extremely detailed in the way they are structured with plants, rocks, and outcrops. There are enough human settlements and structures that the world feels lived in but not enough that it feels over crowded. It is a land being developed but also containing a little mystery.

The weather effects are an excellent detail on top, it might be fluff but it is fluff that makes the world feel less static and more alive. There are an extensive collection too; a day and night cycle with decent lengths that add a little bit of variety to the environments as your traveling and questing. There are variations of cloud cover and wind movement, and a storm system that comes along every now and then blanketing the world in rain. I don’t think it is on a cycle either as I couldn’t pick any particular patterns out of it which really is a nice touch

The monster designs, while over the top and completely wacky at times offer a range of diversity you don’t see very often in MMO’s. They aren’t just re-skinned animals from day-to-day life (although there are those too) but more animals and monsters plumbed from the depths of the creators imaginations. They look and feel alien in many ways which really helps immersion into this new online world of Eaorzea.

The amount of detail that has gone into the world and many of its locations is amazing. They all keep with a certain architectural style but belay a sense of understanding about what makes a world.. a world. Tables and chairs for shops, the guild crafting locations contain every many of device you would expect, and the mechanical contraptions contain enough components that you can believe the exist. At no point did I have to suspend my disbelief at how this world works and functions, it is populated developed as much as you would expect and more.

And after all this I can’t believe how well the game runs. Keen and Graev noted the amazing performance in their recent impression piece on their relative old computers and I have to agree. My laptop is badly in need of a service as the stuttering during gameplay has gotten quite bad. In GW2 I will frequently have the screen freeze after using skills or certain zerg encounters, even in Shadowrun Returns I get a few but here it runs like a dream. That is either voodoo at work or some magnificent coding and it makes a huge difference on how the play feels.

They only place my true irritation lies right now is in the way Square Enix handle their account management, it is actually quite hilarious how bad their system operates. There are so many different options and account settings entered from various sources that each only allow a certain amount of editing. It took me close to an hour to find where I could download the new game client from because It is hidden away within the beta forums which, for god knows why doesn’t have a link to on the main site. The lack of forethought in the design of these sites really is amazing. The last thing you want to do is make it hard to access your game, especially when your a subscription mmo in this day and age yet this goes beyond that sentiment into the territory of rage inducing.

Bhagpuss at Inventory Full also picked up on the sentiment of uncertainty I’ve been feeling lately as well because of this appalling account system. I have yet been unable to enter my promotional code as it is invalid… apparently this is a rather common thing for the people who ordered through Amazon or other companies not Square Enix. This reeks of mismanagement by them, Amazon is a major distributor and if you can’t get it right for them in speaks volumes as to your companies incompetence.

I have no idea if it will work, whether I’ll get the right code for headstart, or even if I’ll have to start again on a new account and create another character. The content is barely interesting enough to do the first time, if I had to do it a second time I don’t know if I could be bothered.

I hope it does work out because I have enjoyed it enough that I would like to continue. Because of the detail involved, and the extensive range of features it feels more like a true MMO than most that have come out in recent times and I kind of like that. Without those it would be a sub par MMO at best but with, it appears to be worth a shot.

6 thoughts on “Final Fantasy and a Preview Reborn”