Pretty much all this weekend I’ve been deep (metaphorically and lieterally) in Terraria. Lots of building, digging, killing monsters, and lots and lots of dying. After a short time playing I remembered just how fun Terraria can be, especially when playing with others. It’s not just the same experience this time around as there are a lot of new interesting things to see, do and learn and it might be awhile untill I’ve gotten my fill.

The current collaborative project has been the main tower containing all manner of knick knacks. It started off more as a medieval castle that acted as a communal crafting area but now after the expansions to the throne room it is starting to look more like a rocket ship. I can see this little structure getting some more upgrades in the future untill it barely resembles it’s beginnings.

Ooh.. And I just got a fancy bubble machine. I love all these fluff items you can get now.

Underneath the rocket castle is an area I keep expanding on containing quite a few tombstones. I’ve tried to keep up the witty referential comments relating to that particular death… It’s kind of a personal scoreboard for me.

The tiny tower apartment complex housing a lot of the npc characters. There are so many now! Shops for all major of items, crafting, consumables, and cosmetics. Really great collection that keeps you working for the next one. 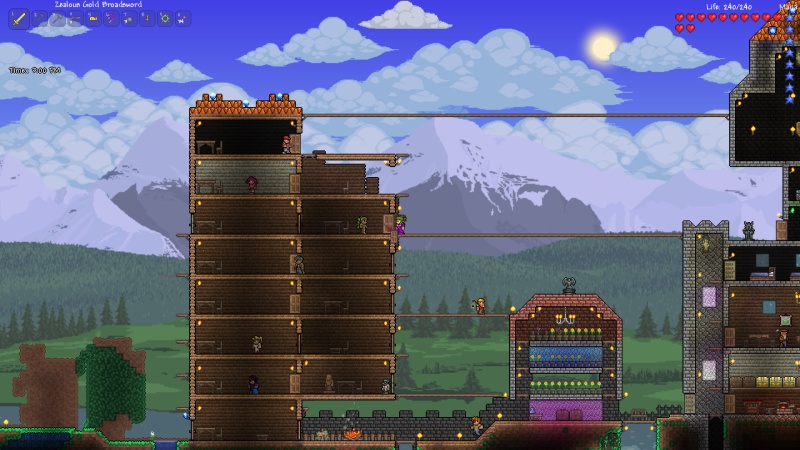 No Terraria home is complete without its very own monster arena; a place to battle lost souls, a little pvp and the spawn area for the eye of cthulu. The church connected is our bastion against the forces of the corruption, having all that stone there stops the spread.

While digging my underground highways, an activity which I strangely enjoy I also found Jeromai’s cute little cabin nestled into the ravine. It’s funny seeing everyone’s different playstyles like this, those that work together and those that like making their own way.

There is also a long path down to hell now after I enlisted the help of a pimped out friend. Even with the best mining item it still took him a long time to make it all the way down. Although once he was down there he thought why not beat the wall of flesh boss since he had the item to spawn it on him, unbeknownst of course (it better have been) that it would permanently changing the world to Hard mode.

Oh the slaughter that then blessed the world. It actually took me a while to change it back, I didn’t want to lose everyone’s progress by restarting the server so luckily I found a program called TEdit that let’s you fiddle around with the options and even change terrain if you wanted.

Looking forward to more fun this week and the server is still open for all should you choose to jump in.

8 thoughts on “The Terraria Times”