Well, after so many weeks that I’ve actually lost count I finally ventured back into GW2 and really I don’t really know how I feel about that. It certainly doesn’t have the level of interest and passion I used to, not even close, but I actually still kind of enjoyed the experience. Now I didn’t enjoy it enough to jump back in full-time as that ship has well and truly sailed but I do think I should at least keep in touch more so than I have been. My entire play was of course in WvW, a mode of play a really enjoy despite its numerous and crippling flaws. I was actually so engaged in the experience that I was unaware of the time and stayed up untill 2am… cue the hubby stumbling out and seeing me then shaking his head.

I played on Friday night (aest), the final night of the first league match that was pitting the three NA super powers against each other, except this time it wasn’t the usually round robin attack patterns and defence of your particular sides of the map. It wasn’t a chaotic mess of servers struggling against each other for the top spot. Both Blackgate and Sanctum of Rall had teamed up against Jade quarry as a way of ensuring they didn’t win this league from the onset. Usually in WvW there is a certain amount of communication and coordination between certain servers and guilds, impromptu cease fires or as a way of taking out a key enemy but this time they were both united towards a common goal.

This eventuated because of the way the league match-ups had been set up between the various servers in gold league (and others as well) that pit the top teams of that legue against eachother in the first battle. It seems that Jade Quarry were going to have the easiest time in winning their matches and if they were to win this first match, which did seem likely at first, then they would likely go on to win the entire thing. This was not something the other servers wanted to happen and so on just about every borderlands Jade quarry were pitted against 2 massive zergs at all times. The maps were nearly completely overrun with not a green keep or castle to be seen and there I was, with the guild in the middle of it all.

Being in the middle does equal death though

All along I was thinking that these sorts of events, servers working together against a foe was what should have been happening all along. This is the way three faction combat was supposed to be. It has an inherent regulating factor that is controlled by players as a way of balancing out any power discrepancies but here I’ve rarely seen it on this magnitude. This is the reason (one of them) why we often have massive server score blowouts; of one server constantly taking out the top spot for weeks and even months on end without any competition.

Even though we were getting absolutely pummelled at times and had little hope of claiming anything for a reasonable amount of time it was still an enjoyable experience. I felt the full weight of what WvW could be; the massive battles and wars, the political manoeuvring, and the increased overall strategy that rules the WvW world. Sadly the system just doesn’t support it very well.

Throughout the night whenever we collided with these other 2 massive forces the serves would struggle under the pressure and utilising your skills became extremely problematic. I’ve faced this issue before, sometimes nearly as bad but never so prolongued. Entire fights were ruled by whether or not your skills would activate in a reasonable time. Weapon skills would take several seconds and utilities even longer if at all. The strategies we were trying to undertake in all this are often highly dependant on group skills and coordination but when unable to do this it becomes a fight of just spamming your first skill and in a fight like that it further magnifies the issues with being outmanned. 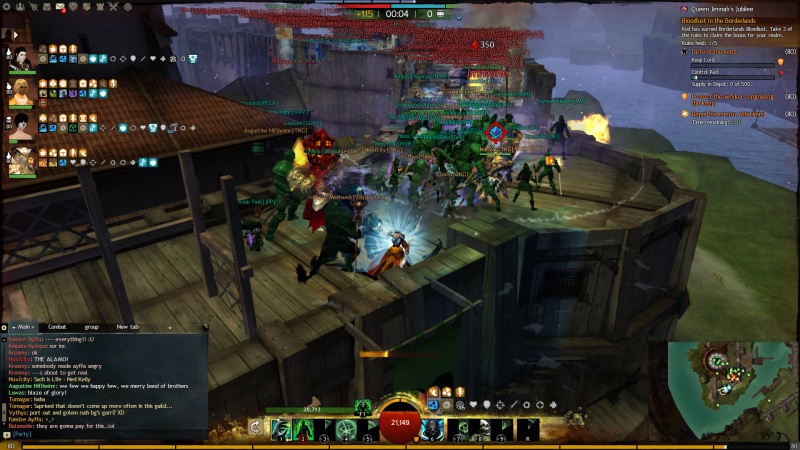 We didn’t expect to win but the frustration that comes from losing under these technical issues  really does ruin the experience. Combat is wonderful at times and the strategies that go on underneath are slowly becoming more complex in terms of skill use and group coordination but it is all seriously hampered by the adequacy of the system. I know my computer has issues but the server side limitations are far more damaging to my and many others experience. It is the reason why it will never become more.They have improved the situation dramatically over the months with the changes to culling and the options you can enable but it is still not enough. Now I don’t expect it to all run flawlessly under the number of players in one area, especially when the characters can be so detailed or there is a lot for clients and servers to be relaying but I do expect it to be much better than this… especially in this age.