The release for Elder Scrolls has come and gone now and well, it’s mostly the same experience as early access. There have been a couple of patches so far but no real earth shattering changes just yet. The bugged quests are still a little more painful to complete, some things tend to need a relog to make work and I’m still seeing the occasional missing asset. No more falling through the world but give that time, I have a knack for finding those spots. I have been experiencing a bit of lag on occasions, especially within Cyrodiil and have noticed quite a few drop-outs from party members, these situations tend to right themselves reasonable quickly. As I go there do seem to be more send more bugged spaces and quests, and, going by reports if much higher players it does get quite bad. The early experience is far more polished then the rest do hopefully by the time main playerbase moves up they can polish the rest.

I have made it to level 15 over my play, which is a pretty big milestone as you get the weapon sway ability. It changes up the gameplay a lot as you get a lot more options for play and for beating certain enemies. I added a fire destruction staff so now I have melee and ranged options for attacking but I’m not liking it that much yet. From what I’ve seen it has a lot of synergy with DK but only after levelling it up a decent amount. I still haven’t quite worked out the build for it just yet, I know what I’m working towards but at this stage choice is still feeling a bit limited.

I’ve finished up the first zone, well, nearly. There are a couple quests that I haven’t finished, two that I couldn’t finish and haven’t checked back on and probably a few that I haven’t even seen scattered around. I was able to make my way through all the public dungeon spaces and I mostly enjoy these. They are usually a very similar inner dungeon style of aesthetic but they have enough difference to make each one interesting and there is still all those boxes and crates to rummage through. Some of the design within them though is really quite amazing, such a beautiful aesthetic and so detailed while maintaining a certain realistic but magical charm. 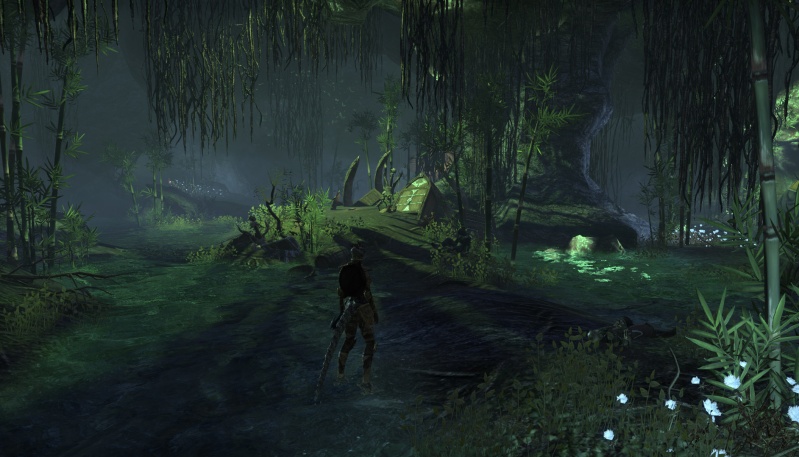 I ended up completing the three dungeons around that level before the eventual Ding and actually really enjoyed them. They are quite weird. A style of gameplay I really haven’t played before that kind of lies between the regular trinity style and the chaotic unstructured style of Guild wars 2. The trinity roles are important to have, probably more so with having a healer but how you go about creating that is rather flexible. For the dungeons I have run I mostly took the part of tanking, but tanking in a less traditional sense. It’s more about managing the encounter and reducing risk for the others in your team.

I was usually taking on the key enemies that were more dangerous and the taunting tools are more tailored towards this approach. Even if you do try and face tank a room the amount of damage coming in will quickly remove that thought. The idea is to grab onto the stronger enemies, taking and blocking their hits while mostly leaving the rest of the team to clean up the other enemies. Sometimes I would grab a mob off the healer, or someone who was low in health. I was trying to avoid as much damage as possible here, blocking basic hits where i could and interrupting the more powerful ones, and of course dodging out of the red stuff. It feels very much more like you are the commander, or leader of a group like Belghast speaks of as you must have an awareness of enemies, your team, and your surroundings and then manage the risk around this. It’s a rather interesting, enjoyable and far more active role for the tank to have. Of course, you do tend to die more though… well, I do at this stage anyway.

All three of the dungeons were quite enjoyable, mostly it is a similar combat feeling and the management of adds was the same but there is a bit to learn with the more specialised mobs, when to block, what to avoid and such as well as the basic group dynamics. They each feel very different though because of the design of the dungeon and the variety of mobs you take on. I think Fungal Grotto was the most enjoyable; the flow was good, the story elements were interesting and the bosses themselves had good basic introductions to this style of play. Banished Cells has some of the more interesting bosses I believe, a lot of movement and understanding of attack patterns. And Spindleclutch, while rather hard had some of the more enjoyable dungeon flow and trash combat.

The one thing I have noticed is that if you are doing all the options around the map like public dungeons, the more structured dungeons, chests, rare spawns and events then you will be getting a lot of gear to mostly fill out your character. I really haven’t needed to craft that much. Of course if I wanted to create some sort of optimal build then i would, or at least rely on the guild a little more but at this early stage I usually get along with whatever I find. A mismatch of armor tending towards heavy and a shield and one-handed weapon. It works well enough and I can take on whatever the quests show me, even the elite mobs and packs. mostly above my own level at times too. Levelling progress is quite slow when you’re just roaming around, reasonable and I enjoy it but very slow compared to other mmo’s. Because of this I think it would be good to optimise later on as the quests and combat are getting harder as I go.

So far because of this the PvP experience has actually been quite enjoyable. I’m still feeling the pressure there to speed through as some of my guild have been doing but that feeling gets lessened once I get enticed by the world and all that around me. It lessens to an extent where I’m happy to just aimlessly explore and complete whatever I feel like. I am feeling the need more and more for PvP, which I have indulged in but when you level so slowly within the mode it feels like a waste engaging in it too much. You’re far less in every way not having levelled up as your missing skills, access to buffs and such as well as build and stat optimisation and while it does uplevel you it really isn’t anywhere near enough to compensate. It does give s lot of gear though.

For now I think I’ll be content going through the zones and slowly building my character up to the point I feel more comfortable. Then more killing.

6 thoughts on “Enticed by PvE”