A Cure for Questing

It is interesting to see in all these new and old MMO’s how the main mechanics for levelling have continually changed over time. Sometimes we see new developments and other times they seem to take back many of the older mechanics and gameplay styles. Looking at the market now, there is a huge variety of gameplay styles on how people and yet I can’t help thinking the more I play these MMO’s the more I believe that the simpler times, those before all these fancy new mechanics provided the better, more engaging experience.

Even though it seems the end game gets more of the focus after launch it is the levelling system that really gets people Interested. It creates that initial impression of a game, creates engagement either to the lore mechanics and community and helps people understand this new world. It is this system that new MMO’s rely on for gaining long-term players. If it fails at points then it hurts player retention. Now while I think the newer gameplay we have does give off a better first impression, especially to gamers outside of the genre, it ends up detracting from that special something the genre has.

What I’ve noticed with the development is that, until recently, there has been continuous development away from group style questing. Making the whole process easier for the individual and lessening the need and engagement with other players which is a shame really because it is these player interactions that make any MMO that much more enjoyable. The behemoths that spawned the genre have this initial social connection to thank for gaining the long-term playerbase it has. It is community that keeps people playing a game far longer than any amount of mechanic or content style and yet it is this that is slowly being corrupted in the path of questing “progress”. 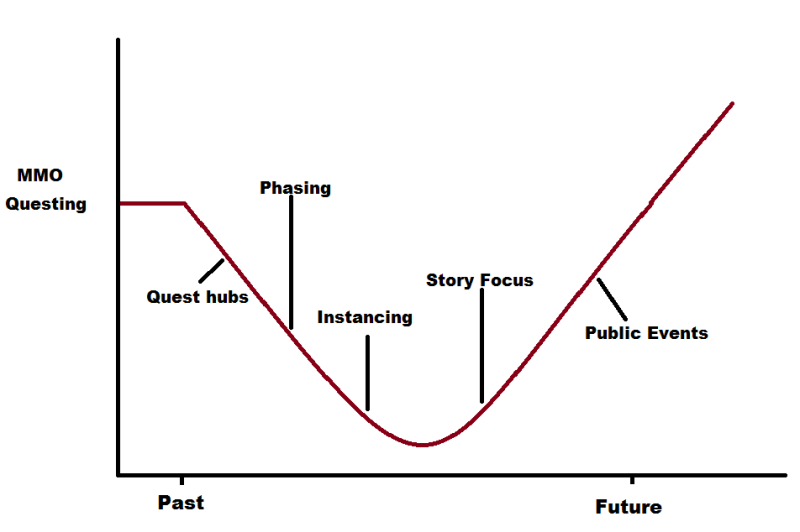 The bell curve of questing as I see it.. a vast downward spiral. Of course all this development has been done in the name of fun; newer funner mechanics to keep people interested long enough to at least suck a few extra  pennies from but is this really the better way. You get some initial engagement but after a time this goes away in place of a resounding sense of loneliness and boredom. Two extremely bad combinations if you want people to keep playing. Now I do see a certain amount of improvement towards providing more opportunities for player interaction but with how self-sufficient we’ve become and the predominance of mechanics like shared kill credits they are interactions that are over in an instant. With everyone dispersing and going back to their own little, insular worlds. It’s a sad state of affairs.

Those simpler times and simpler mechanics just worked because they let people play together mostly how and where they wanted. The further we get with these newer, fancier question mechanics the more restrictions constantly get placed in between this required function. Then there is how Developers seem to be constantly cutting out any sort of gameplay that doesn’t fall within there design, like grinding mobs because it’s apparently no fun. I would rather a hundred hours of grinding with others than another session of being stuck, alone with this terrible story based questing. Enough with the focus on Fun, lets aim for engagement instead.

This does seem to be improving by adding more world elements that allow people to meet up and the advances with scaling characters has been great but doesn’t go nearly far enough. Those that have a slower pace to levelling, which is most players these days become isolated from the others. It is this space we need to see more improvements. I’ve talked before about removing character levels especially as a restrictive mechanic but I’m sure there are other ways to enable people to play together, if not well… then I think MMO’s risk becoming completely irrelevant in the current gaming environment wherein more and more mainstream games are providing a place for quick, easy cooperative play.

It makes me wonder where exactly the genre is going with the future though. Mob design is slowing improving and with the advances in computing we might get the next evolution of questing. Everquest Next and the storybricks design seemed an interesting proposition and I’m sure someone with iterate on the design of Guild Wars 2. Then there is the predominance of sandbox style gameplay that leaves it far more open to the player as to how they progress, I want more of that. Where else can the genre go now?

16 thoughts on “A Cure for Questing”