Progress Report: Going Back to GW2 and Firefall

Come listen to a story about a blogger named jewel,
a poor little gamer always looking like a fool.
Then one day when grinding on some mobs
and up from neglect came a lot of boring jobs

And thus sums up the story of my week. Cleaning the house was a big part of the weekend. It’s kept generally clean, sweeping, mopping and all that junk but bits were getting really dirty like the stove. Bathroom and toilets were yucky and I cleaned up the Pantry and fridge… old food and all that plus a can that was so out of date it exploded, leaking gross peach juice everywhere.

Hubby is in the wars again. didn’t hurt himself this time but had his big toe operated on to remove an ingrown nail.. like curved back a round in grown. Man baby was back after that although it did look rather sore so I didn’t mind being the nurse maid once more.

The other thing we got up to was a nice family lunch day on Sunday. Well food was average, coffee club while a great neutral place to meet people isn’t known for quality. Afterwards with the stragglers though we went to a chocolate cafe nearby and I ate my first ever churro and it was so nummy with chocolate sauce and ice cream on the side.. needz more

I ended up watching a ton of Gurren Lagan over the week. I was after a new anime to churn through and I’d heard about ti before… plus I have a soft spot for mecha based anime. Overall it’s pretty cool but I can’t help but think they’ve focused far to much on the overdramatic. It’s just one endless surge of manly arrogance over and over as the core of the show… kind of like those Dragon ball z episodes where it’s just manly roaring at the screen. It over exaggerates but either too much through the course of an episode so it becomes idiotic but not enough to be laughable.

Well, looking for another suggestion for the week to come

Gaming was rather minimal but I did get a decent amount in, mainly in one game though because that mmo urge took over.

I did end up downloading Guild Wars 2 once more to get that Living story unlock and while I was there I took the time to check out some of the changes. My Max level Necro and Ele were of course still waiting within the mists, the place of random pvp matches in between WvW nights that my play near the end had become. 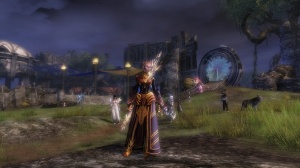 It was rather lively due to the mergers with lots of conversation happening and more matches then I’ve seen in a along time. A change I thought should have happened for the mists in the beginning.

Jumping through the gate from there took me into Lion’s arch, the former gathering point for each server, the point of relaxation and gambling. The changes are far more drastic than I thought they were too as the whole zone has been transformed. It’s hard to believe though that they put so much time and effort into the redevelopment of an old space when people were slavering for a new zone at the time. It does spurn on the story and having change within the world is an amazing point but is that worth it, and would there have been better ways to achieve that aim. 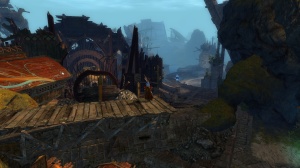 Dry Top seems like an interesting new space and it’s good to see that they are finally adding to the game world once more. I always thought the world based and event experience was the better part of playing (when not murdering others in the mists) yet it was avoided throughout living story one apart from a few additions.

The one thing I feel though is that the zone is just far too dense to the point of feeling claustrophobic. That map is just filled to the brim with icons in every part and the map makes use of the different planes so your jumping up and down and in between. You never get a good view of the map space at any one time and I’m one that enjoys the wide open plains more than these tight corridors. pretty though

Unfortunately I couldn’t play for long as my mouse right button is still kinda of broke so moving around was painful and in a space with valleys and walls all around, of tight corners and platforming well…that will have to wait.

Firefall was a big part of play and there is a fair bit to learn about all the new changes. The crafting and researching is quite different and even how you upgrade and equip four frames has changes a bit but I can’t help but thinking most of it was rather unneeded. The system before had many of the same elements and this is more a visual change rather than a functional one. The other system I guess was more complex but the early times were easy to understand and it had more depth.

Crafting looked more complex as well but that was mainly due to the quality types of resources. The system actually worked ok and this system is the same with needing multiple sub components to make things.. worse I think because sometimes you need sub components for the sub component of a sub component… it’s pointless.

There is a lot I need to say about the game and it’s more recent iteration but that will come in time I think. For now I’m enjoying it once more, especially the more social nature of it. In the week I’ve been playing I think I’ve added another 8 or so people to the friends list, a few I play with regularly now. It’s amazing how simple changes in the structure of levelling can make.

Levelling my dragonfly Frame Up to cap once more has been the biggest priority. It was pretty high before this update although not sure exactly where but I’ve been taking it back up again and am one level short now.I like the class and the healing aspects are a lot of fun and quite needed in a lot of the scenarios but I’m feeling the need to get a DPS class more up there now. I have quite a few of them already unlocked but I’ve been hearing good things about the recluse, so I unlocked that with some leftover pilot tokens I still had from beta and tried it out. Fun class and definitely a lot of aoe pressure.. should be fun

Oh.. and the actual release happens tomorrow too so hope to see you in game.

7 thoughts on “Progress Report: Going Back to GW2 and Firefall”