The Open Beta for Archeage has absolutely consumed me over this weekend. I went into the beta a little cautious about the game as it wasn’t exactly the sandbox I was looking for. It didn’t have many of the modern Bells and Whistles I’ve become kind of used to over the years either or that flashy and constantly demanding style of play that keeps you bouncing around the screen. It’s vastly different than that and it was a bit of a shock because of it.

What I have come to realise over the weekend, and even by playing a couple other games is that all these “fun” games are just kind of overwhelming after a time. You can never really relax into it, it just keeps trying to hard at keeping you busy every moment of play. This in part was a way of stopping you from thinking and reflecting on the experience that really didn’t work in my case. Here I’m getting back into the rhythm again, a slow methodically style of play that for some reason gets me more engaged. I felt this same feeling when i played Final Fantasy 14 way back then but while, I found that game quite lacking in a few aspects Archeage is that and so much more.

Playing Archeage I’m also rather impressed with all the little things, the parts and mechanics that flesh out the experience to be something more than another generic styled game to level in. Of course it takes a focused effort to see such things and even more to be involved with them but it’s interesting that it’s all there nonetheless. I’ve said before how much I enjoy the exploration aspects to mmo’s; not just the tick box style gameplay, go here and get the post card style play but the type where you peer to the left of your prescribed path, wonder whats over there and explore instead.

In here at my level it was mostly going in search of an absolute multitude of plants and such growing all around to use in the in depth and expansive crafting system. These plants were just everywhere although it was interesting to see how they all seem to keep to a certain logic of the world based on climate and terrain. Just something small but immersive. after the weekend I had a whole bag almost filled with a variety of different ingredients all with their own ways to use and recipes to be used in.

Then there is the crafting which is just utterly nuts. There are so many professions to choose from of both gathering and manufacturing that you progress up individual with only a limited amount of times to get to the next stage. 5 professions to take to the next level where you gain bonuses for doing them and only 3 places for master level. I was surprised to see as well that many of these professions where also dependent on each other for parts and components and with the labour point system it means you have to be more focused in a specific are of crafting only which should stimulate the economy well.

The main part I love is just the wealth of fluff involved. Stupid cosmetic style things like gliders and mounts that I can see myself spending inordinate amounts of times trying to get. Silly grind type play involving lots of repetition in killing and daily quests, not because I have to but just because I like them and want to fill out my character even more. The pets are also just utterly adorable and the growth cycle of taking care of them is a very nice touch so i will be getting one of each. 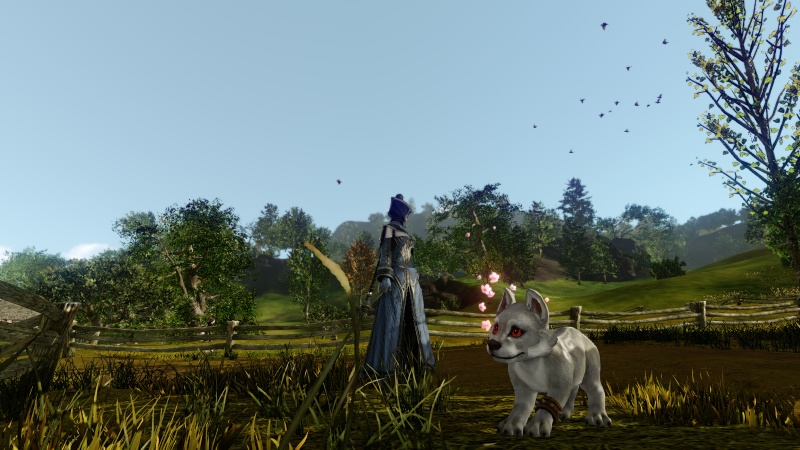 The world is just gorgeous and I’m so glad that I updated the computer now because I get to see and be apart of this magnificent world. It’s large and expansive and while the quests seem to funnel you in a certain path there’s no walls holding you in, no valleys and mountains blocking your path. Most of it is open in the way you traverse and for me, it is the first time I don’t feel so claustrophobic while leveling. I can break from the path and roam around to my hearts content. It feels more like a world because of that, more so than most mmo’s I’ve played lately.. it’s just disappointing that the mobs and npc’s are so static and the zones experience so unchanging.

I’m a sucker for the more realistic aesthetic too and this brings that alive far more than a cartoon aesthetic ever could. I like the world more, I enjoy exploring more. I even enjoy my character so much more even though she’s just another boring human.. oh and the tragic minstrel style clothing.

It’s funny seeing all the neighborhoods popping up all around the world too. Some houses finished others in the prices and a wealth of little farms growing a range of different things. I love exploring through these little places to see what there doing and some, have found the most beautiful places of their own. It injects that feeling of change into the world that is so sorely needed.

I just missed out on getting the required number of tokens to try and create my own house but it’s funny just how big a draw this kind of housing is for me. I enjoyed the creative aspects of Wildstar and rift but there is something so much more satisfying about making your house part of the world. With the taxes that need paying and the farms to tend I see this creating a strong bond to the land and something which will create that regular play for me.

A place to call my own.. SOON!

Overall I’m enjoying it far more than I thought I would. The questing is the basic style that has regrettable become standard in the industry but it’s all the little things that keep you hungering for more, to keep going on that path and grinding out the quests. There is a lot to entertain your interests when you get bored of all this in between but that didn’t seem to bother me too much, I just seem to have a greater immunity to this kind of grind. All the while the reports of PvP from the guild kept drawing me onwards too, random ganks going on in certain zones, raids on the questing camps of the enemy faction and all the trade fun that’s going on. Even the battlegrounds sound like fun although more done for the gear grind.

I can definitely see why some won’t like it. The combat is an acquired taste from old that won’t suit many with how your very immobile and just the cycling of your rotation, not to mention the dozens of skills to handle on your skill bar. Questing is just as forgettable as usual and the story is really quite bad form what i read but then I’ve always been a cutscene skipper. But whatever because right now it’s the best sandpark we have, I mean, in what other game can you park your boat at the city gates.