Some Excellent Elements of ArcheAge

After my little “I quite,  and no you can’t have my stuffz” post I was still doing a little thinking afterwards. The failures of ArcheAge are well documented by now, here and elsewhere and are too numerous to go into detail. I think most that have followed the title for a time know about them. I don’t want to dwell on that too much any more as I’ve moved on and have more been reflecting on the elements I enjoyed instead.

Labour Points
While the implementation had a few issues I did actually like this system for a few reasons. For a sandbox I consider it almost required that you shouldn’t be able to do everything, or if you do then nothing really that well and this is what labour does.

Having the amount to spend was enough for me and it makes you focus on certain activities. I was able to spread it out into a lot of gathering type activities or spend it all on focused crafts. It made you specialise in a way in a certain field and due to this specialisation items were needed more within the marketplace and traded more readily Monday friends, guilds and on the market.

Being self sufficient is a curse to crafting and I often see it in most mmo’s. Just create a few alts and make everything you need but here, with labour being account bound you could only gather and create so much so you just had to get things from those around you. It created interdependency between players. It made guilds more meaningful with sharing between people and it stimulated the server economies.

Of course this was a bit ruined due to the differences between ftpand subscriber, the ridiculousness of having different rates for online and offline and of course those stupid labour pots. Those created a system that translated real world money into in game power. The base system there was good though and even cash shop idiocy couldn’t hide that.

Trading
Now a more comprehensive system of moving around materials and items between points like eve would be more interesting but for a basic system of creating wealth the ArcheAge trading packs did the job well. They used a range of different materials and created the marker need for them and we’re a good tool for most individuals to create wealth. It wasn’t much but it was enough to be able to save towards items you wanted.

I liked how it also created movement around the different zones and those main roads became quite travelled with carts rumbling by and people travelling on donkeys. It made the world feel full, busy and alive. It made people explore more and just experience the world, and even created incentives for those in the lower areas to get up there and maybe own these items themselves.

I also enjoyed the risk reward aspects of the trading system were more dangerous areas and longer routes gave more money. To gain more people would often try for the more dangerous trade runs and then there were those trying to profit from them. Waiting and ready. The ocean was nearly always a hot spot for PvP action which I always enjoyed being a part of. Going on a trade run was full of tension, every other sail on the horizon a potential threat. Being the pirate was amusing too and using a variety of tactics to ensnare and capture. No matter which side, win or lose it was a lot of fun. 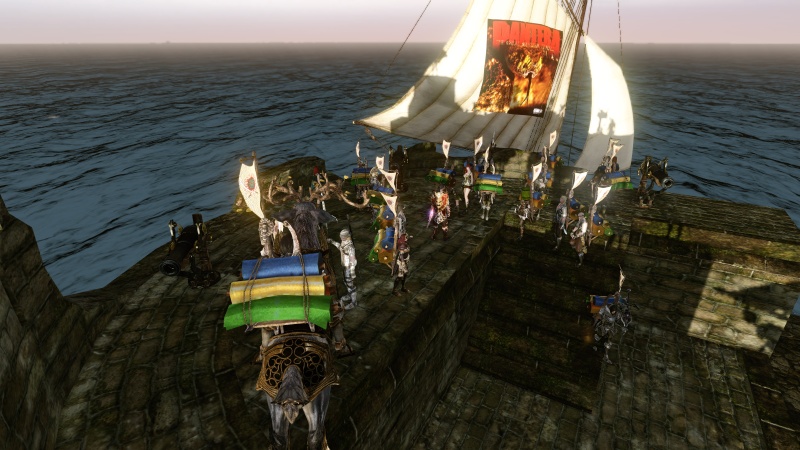 One of the stolen hoards

Open World Housing
Ok so there were of poorly thought out mechanics that dealt with the housing. Poor implementation with little restrictions and of course shitty cash shop complaints. Having labour Points purchasable as well as tax certs ruined the system for many and only rewarded the wealthy. Exploits pushed out legitimate players and due to the eventual flat rate of taxes meant the housing system ended up largely being controlled by land moguls but still, the joy that was having a house, a real house out in the world was amazing.

For me it created a greater connection to the world. Hellswamp was my home and I actually met and talked to a few of my neighbours. I gave cart rides to people during peace time and defended our home when the other faction came raiding. There was a certain sense of connection to it, it was where I lived.

It was also nice to just see that growth as a server. Houses going up around. Farms being tended constantly. A constant buzz of people going about their daily matters in there little housing clusters. Farming, gathering and crafting. It may have had the same functionality of the instanced style but there was something about being in the world that made it more. Just more useful, more valuable and of course to get more invested in. I never once left it idle until I left. It created a greater incentive that anything else I’ve played so far, far more than a silly daily.

Now they were many things about it that I would change but still, it is the principle of it that I want to see more often. Give players a way to make the world their own.
…

So that’s the main mechanics. There are a few smaller things that made it a truly engaging experience for a time. It all added up too to make a game that truly incentivised guilds and working together, not just for the random dungeon but throughout play. I also liked having the open pvp situations again. I enjoy that feeling of apprehension, the tension and of course the thrill when it happens. Mostly, just out of 3 or 4 months I’m glad I played because I had so many great experiences and so many more stories to tell.

2 thoughts on “Some Excellent Elements of ArcheAge”