It’s been a while since I did a round-up of all my activities and adventures, I don’t know why just more felt like doing other things. It has been the busy Christmas period with family of course, cooked the usual lunch for everyone that went well. Kind of nice to do it even though it’s a big day and more of coming and cleaning it up. Wouldn’t do it all the time but fun once in a while.

That wasn’t even all of it which is funny.
Baked ham was really yummy as well

Now that you’re drooling a little I’ll continue with the other stuff.

Over the holidays I did end up getting a lot of gaming done although a lot of time was eaten up with random anime as well. I don’t know why, I just felt like watching a lot more of it than usual. It wasn’t even related to writing things just playing and watching a lot by itself.

Psych Pass was an interesting and well produced series. Coming form a psychology background I couldn’t help what idiocy a system that judges people solely in heightened moments of stress rather than general well being is, as well as the nature of trauma counselling in general. Putting that aside it is an interesting concept of having people’s state of mind, and likelihood to commit a crime all judged automatically and anonymously by a supposed computer system.

The characters are quite interesting and you get a good sense of their personality, motivations and goals throughout. Even the straight laced protagonist has a lot of depth to her character and growth throughout the series.

The plot has a lot of twists and turns too as you get to learn more about the characters and world that tend to make you rethink the situation yet the overarching plot all fits together and makes sense as a larger narrative. It’s well done and I really enjoyed it’s dark tale of this dystopian future.

I caught up with Space Dandy once more viewing the last several Episodes and it’s weird how much the series grows on you after repeated watching yet, ends up being rather forgettable afterwards. The shows are a lot of fun to watch though; weird wacky stories in this hyperactive universe with a cast that is rather bland but enjoyable to watch.

Log horizon is still a great show that gets the feeling of a gaming community right. The actions of players, the style of the game and experiences and just how the interactions and conflict occur are all really consistent. Its amazing the sense of familiarity you feel through the shows and the way it makes you remember your own experiences that might relate to the certain parts within an episode.

I ended up watching two of the fate series too, starting off with Fate/Stay night and then Fate/Zero afterwards. Fate/Stay seems like it’s going to be an interesting series revolving around the command and battling of ancient warriors. Each of the people have their own reasons for participating and the fights are rather spectacular. Not huge in effects but just that sense of impact the scenes have. You can feel the actions, the big hits and just how much is at stake during the fighting. 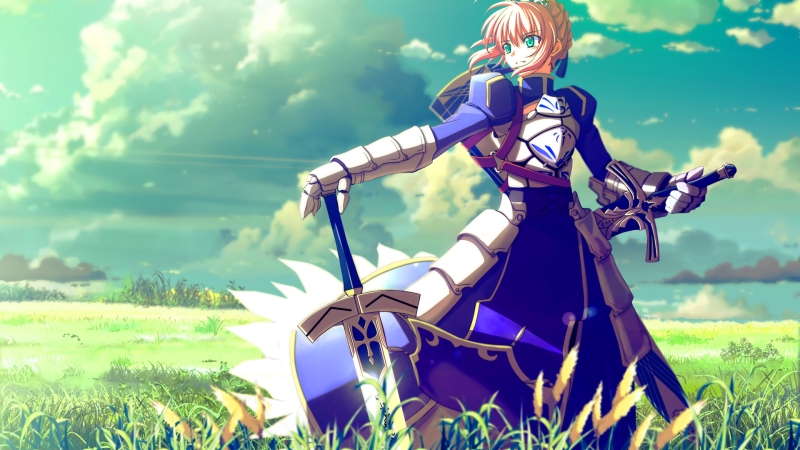 Saber is rather awesome, especially considering the back story

Out of these though I think Fate/Zero was my favourite. Just the way thoughtful way it approaches the characters but also the lack of disregard it has for them at the same time. It is an absolutely brutal series, a series that makes you feel for those in the action whether that be regret, hate, or some kind of morbid curiosity.

Steins/Gate was an excellent series as well with the difficult theme of time travel. A crazy protagonist, quite literally and a bunch of other misfits medal with time to rather interesting results. What makes it more is just the absolute depths of despair it brings you too, then back from over and over again. So many tears at the heartbreak they endure and just the personal stories being told.

The madman site, anime lab, is where I watched most of these and is getting a lot better to watch shows on now. Loads much quicker, remembers what you’ve watched and where you stopped plus keeps adding to the shows they have. Really impressed so far. AND ITS FREEEE so yay… usually just an add when you start a show. The other site, well, it’s probably not exactly legal soooooo…

I think the main game I played over the Holidays was The Repopulation and I really should have written some stuff about it already. The promise is there, as is that basic sandbox I was really wanting but of course there are concerns in this early state. uggghhh.. fine… I’ll get to writing that review.

I’ve been steadily progressing through Dark Souls in that dogged way you get to. I keep facing the tough challenges it is throwing at me and then getting all stubborn in that moment of trying to kill them. I do like how, even during those tough encounters you can notice the patterns of attack and realise the possibility of killing the beast. Then it’s all execution. 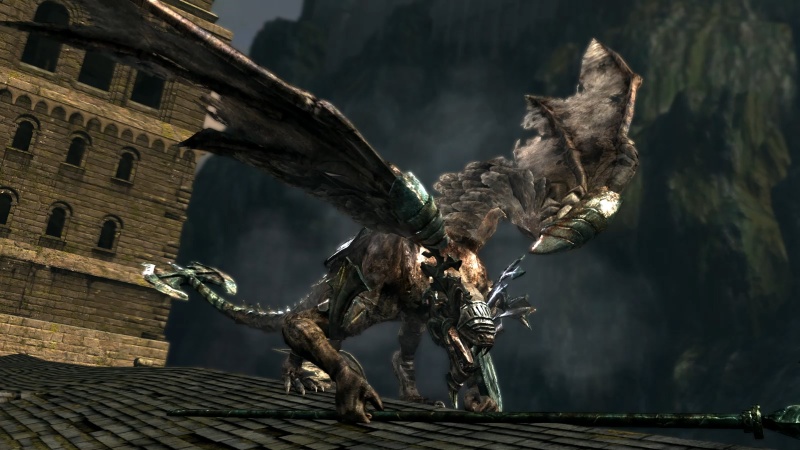 I’m getting much better at the combat now I think too. Better at knowing when to block and dodge and just using that lock on thing correctly. I’m mostly getting the bosses down a lot quicker than the first one too. There is just so much to understand about the game I have no idea about, the different stats and hidden ones. The weapons and gear I should be focusing on or just the methods of upgrading. I even get confused with the areas quite often.

SO far I’ve made it pretty far clearing out the church and the forest area and even through the beginning of the depths. Last major Kill was the Sabre Demon… Satyr.. ahh CAPRA who was rather tough although I think I mostly lucked out on that kill as I fell onto a ledge which enabled me to make a kind of cheat way to beat it. Gotta love that plunge attack working again.

It has been kind of fun making the let’s play too although i’m really unsure about what it is supposed to entail. oh well…

Dungeon of the Endless was a great purchase I picked up during the steam sales that ended up consuming a lot of my recent Play. Excellent mix of rogue-like mechanics like permadeath and randomly generated maps, some rpg type methods of character and party growth as well as some weird turn based tower defence mechanics. Never played anything quite like it before but it’s really addictive once you get the hang of it. 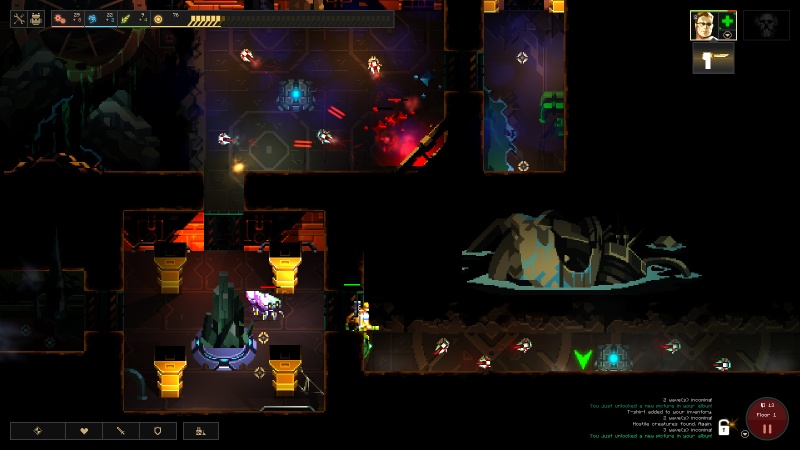 Ended up playing a fair bit of the multiplayer variant over the holidays with Jeromai during one occasions and Doone for another. It is a lot of fun playing together in this way although it does seem to add it’s own challenge in a way. You can explore a lot more but you also need a lot more food to sustain that many people which does become challenging… especially when a certain someone burns down all my crops.

Overall really enjoying it and eve in it’s early access phase it works well, the server systems are functional with just small issues and the matchmaking system seems good too. There are even a few extra mechanics and gameplay elements to be a ware of too that work well with the new multiplayer play

Play time has slowed down dramatically now after levelling up to 30 and getting all of my skills and passives unlocked as well as getting two characters. Armoured Isys and Amored Bryce. Still enjoy the coop play now and then though for a time killer and it gets a lot more fun at higher levels as there is more challenge and the people with you are generally a lot better as well.

I don’t know why but for some reason the heavy rpg games just don’t gell with me that much, i just get bored dealing with all the story and character exposition and more want to explore or go smash stuff instead. I like a little but to make the smashing make sense and the scenarios fit together but when all I’m doing is reading dialogue and making story choices then I lose interest.

It definitely is a very pretty game. The characters and story are well down. There is a lot of choice in how you approach and fulfil missions and the rpg progression of the characters is rather deep. The combat is a rather good turn based type as well that requires timing and thought to win. Something I’m not so great at which was highlighted well when I put some oil on fire, caught some guards in that blast and then got slaughtered.

Seems like an good game and an interesting experience, so I’ll probably get to it later.

And that’s my exhaustive list which I don’t think covers every game I played and not even close to everything I did within them. For the week to come I can hopefully get some more time into The repopulation. probably more dungeons of the endless too.. seriously addicted. And of course, more DARK SOULLLLLLLLLLLLLLSSSSSS.