I have no idea why Permadeath holds such a fascination with me but it is always something that keeps me playing and engaged with a game. Recently I’ve been playing quite a few games with permadeath features or permadeath as their core mechanic and it is because of this that I’ve played them so much.

Diablo 3 has hooked me again and it’s funny but after this year of play, and after losing so many characters I still don’t have a normal character at max level. I have gotten to cap quite a few times, and many points in between. I have spent countless hours, probably a couple hundred playing these characters but all that has amounted to is a fresh character currently in the early 60’s with no certainty as too how long they will last.

Project Zomboid is there too, and a game where you die quite often to have all your work reset. Back to the start with scavenging once more, protecting yourself, and working towards another short future. Don’t starve is the same sort of play, collect and survive that maybe lasts a little longer but still amounts to a game where you are constantly restarting and beginning the process anew. Dungeon of the endless is another game I’ve been playing for a few weeks now with a style of play that involves basically repeating the same gameplay over and over.

It’s just weird that repeating the same gameplay gets me so addicted then things like alting leave me in cold sweats. Running the some dungeon a sleep filled with nightmares, and the absolute horror that dailies whose charm lasted less than the cup of tea I just finished. That sort of repetition is just something I don’t enjoy yet the repetition that comes from death, a complete restart doesn’t bother, in fact it makes me even more interested. I just don’t understand that.

Random generation of content is a part of these, but not all so it’s not that. It does provide a measure of replayability and dynamism to the content but not to change the base gameplay and certainly not enough to account for the amount of hours played treading over the same ground.

Perhaps it’s that these type of games often have a rather defined power curve. You can see the progress you make over short periods of time whether that be building up your abilities, creating a longer means for survival or just growing in power. There is always something to work towards, something to gain over a short period that keeps you playing and then coming back again.

It’s kind of a more focused style of play too. It front loads progression like I said but also the basics of the gameplay so the rest is just stockpiling what you need, optimising the process and then surviving as best you can. 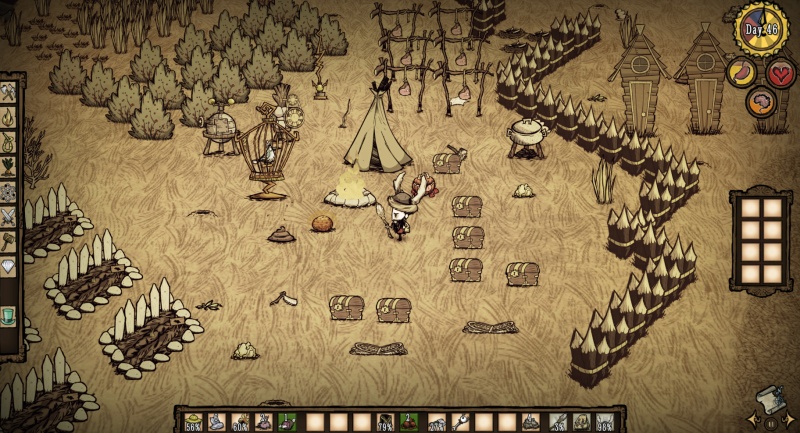 I guess I’m also just the kind of person that more learns from my mistakes. Dying is of course the biggest of those mistakes and one I almost always contemplate to think just what went wrong, how I could have done better and also ways I might be able to improve upon my character and gameplay. It is something that always seems to make me strive for better, more so than any motivator. I guess it becomes more an intrinsic motivator, something within me that I strive for rather than an external reward or element of character growth.

The other thing also is that I get some kind of sick enjoyment from my characters dying. The thrill of those moments beforehand are the times of gaming that are so heightened they elicit strong emotions and strong memories. These are times I don’t easily forget and feelings of play I always have an urge for.

3 thoughts on “Purpose Within Permadeath”