With a few people talking about drawing lately like MMO Gamer and on the twitters like Missy I’ve been kind of feeling the mood again too. I haven’t drawn much in years although, that is except a sylvari inspired outfit I was working on.

This got me thinking about trying to actual colour it, not just with the coloured pencils I have around, in a box somewhere within the office clutter, but actually tryign to paint it digitally.

So I set to work in GIMP once more which I don’t think is terribly optimal for such things. I outlined the major points in Black, zooming in pretty close and folling along the lines with a small black Pencil. I then tried addings some block colours and realised that there were holes in those lines everywhere so I had to go over them all again.

I Then created a duplicate layer with these lines and placed it just underneath on the the Lines layers, that way if colour bleeds over a little the lines will still keep it clean.

Then I added the block colours to the picture. 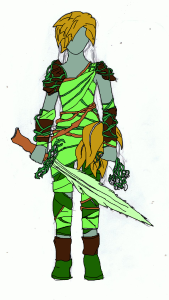 From there I duplicated this layer and then began using the magic colour wand tool thingy to select base colours and add a little gradient to it. This seemed to work out pretty well although still doesn’t have the depth I wanted. From here, which I did a bit on the chin line, is adding some darker shading and blending it in. This layer is actually above my base lines as then you get those black lines peeking through after you’ve blended a bit creating a better, but smoother definition.

Seems it’s working out (except for the feet, GRRRR) but taking a loooooong time. I probably should read up on how people actually do this instead of how I kind of fumbled around to do it

3 thoughts on “Sylvari Drawing and Colouring”