Progress report: Adventures of the Unemployed

Hellooooooooo everyone and welcome back to the now so weekly Progress report. I can’t of dumped doing this a bit back as I really didn’t have the time, or it was cutting too much into gaming time and I didn’t have that much I wanted to say. There were a few games I might have skipped over because of that as well as the stuff I’ve been watching and doing but.. oh well.

And now it’s back, hopefully as with all the down time lately with being unemployed I seem to have a lot more time for gaming. It’s funny though because it’s more now that I have the time for all my random web searching, funny things, reading blogs, watching tv and anime and just general house stuff and so I have that time solely for gaming in the afternoon most of the time. It’s nice… someone please find me a wealthy donor so I don’t have to work though haha.

On the job front I might be getting some casual work soon which is good. Put my name down and registered .with one of the bigger agencies that fills in for centers all over, and they said they are in a busy period at the moment soooo….

oh and in case you didn’t see it on twitter here’s interview Eri, A beast not often see out in the wild and one easily frightened by camera shaped objects.

I had tried this with a large group before and for some reason it just didn’t work. Once you have a couple of people who are rather unenthusiastic in the game it just doesn’t work. I it is a little more abstract than a standard table top as well which makes it harder for some, especially the non tabletop types in getting involved.

This time it was just a couple of friends and I having a game and it went really well. The rules and set up do seem a little confusing at first but are remarkably simple once you get the hang of it. Like most of our games we kind of glossed over rules and then get confused once a certain element pops up, cue frantic scrambling through rulebook and making up our own rule but it works. 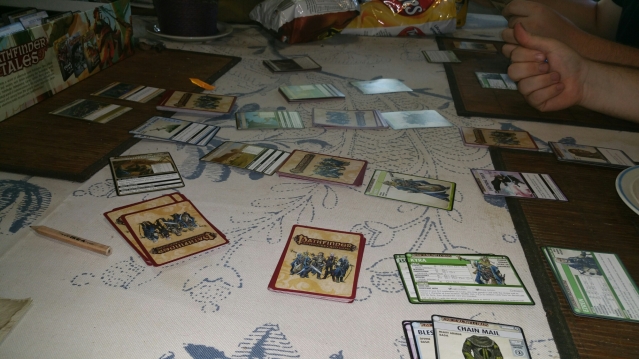 Overall I really enjoyed it. It reminds me of those figure style Dungeon tabletop games, like hero quest but instead of all  the setup and character sheet stuff you just have a bunch of cards. I generally enjoyed the use of the deck building and use mechanics as well. You have a lot of things available to use but the question is where and how as you can run out, a damage also takes its toll on your deck.

The growth of this over time seems interesting as well as you slowly gain a greater amount of cards to use as you progress on your missions, and you also gain new abilities and stat bonuses to use throughout. Makes it more interesting to then take that same character through the other missions.

I did find there was a little too much focus on combat and the use of strength rather than utilising the whole of the characters abilities but I’m not sure if that’s just for the beginning or if it will be a continued focus.

Overall though a lot of fun, can’t wait to continue on.

For my usual anime hit I’ve been watching Assassination classroom and while it has to be one of the dumbest themes for an anime it is also a really fun, interesting show to watch. Basically it is about an alien being that has plans to destroy the world unless someone can kill him, and of course he sets the stipulation that he wants to teach school kids and so we have a situation where we have a classroom whose main aim is to kill their teacher… yeh, completely ridiculous right?

But once you start watching it is actually a rather endearing show  with some good character building of the students as well as their position and relationship. There is a lot humour placed throughout that makes you properly laugh, not that weird one-off hiccup that most only seem to get. And it surprisingly has a lot to say on japanese culture and class structure.

Great show and worth a watch, currently hosted on Animelab as well.

There was more but not as much Diablo Hardcore fun this week. I’ve been steadily growing my Witch doctor while going through the torment levels. Stats are getting up there, especially my survivability. I have a number of safeguards now, that passive is always equipped but I also found a neck accessory that sounds like a decent death save as well.  I’m getting through torment 2 quite easily now as well which is nice, putting the greater rifts up to about 13, not far and I have the toughness to go further just not the damage at the moment. Not sure how to make that go up further either.

Surprisingly not an early access game, what’s the world coming too. A great game too and a narrative experience much like the devs previous titles Echo Bazaar/fallen london with a lot of the same elements too. Sort of that steampunk london vibe with good dose of that lovecraft. It is rather text-based with a lot of reading and decision-making along the way but I really enjoyed it, usually I skip quest text but this had me absorbed like a good book tends to do. The whole game oozes that sense of the mysterious, and you go about your travels uncovering these stories and making a name for yourself and the experience is all incredibly well put together., everything fitting together to make a really engaging experience. One where I’m actually writing down notes for the first time in a while.. 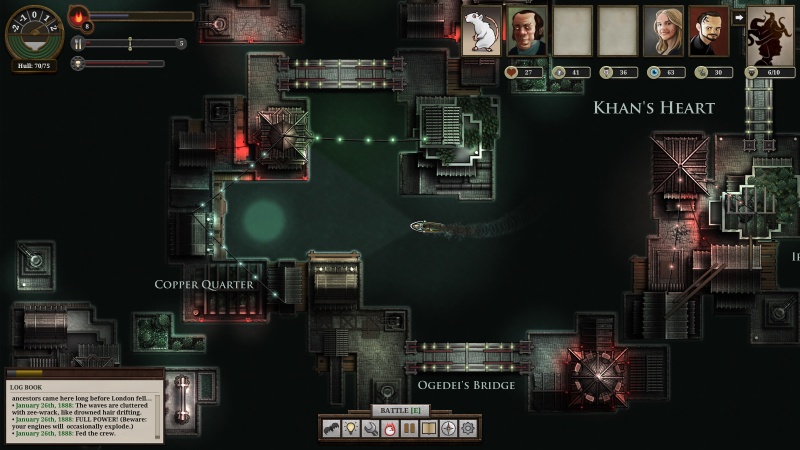 Back into my awesome explosion simulator and finishing off the campaign mode. Same sort of stuff but it does get a lot trickier in those later zones. I also took the time to check out some of the other ones but overall I didn’t really enjoy them as much. The explosion run mode was rather frustrating as you have to keep moving forward at a quick pace which, take a little bit of the fun out. You keep making those same stupid mistake, dying to stupid things and just missing out on those twitch moments and after a lot of runs doing the same thing trying to complete it you’ve kind of had enough. Performance is an issue in this as well, the first one was fine but there was noticeable lagging on the second map with all those explosions and pixel effects and such. Even after you have completed some of these hard maps it doesn’t save your progress, making you do it all over again.

The other was more of a timed run and yeh, while better than the other it still adds an extra element of needless frustration and restarts. Multiplayer seems to be working better

I’ve been needing an mmo again lately, absence makes the heart grow fonder after all, and I haven’t played the secret world in a while. Most of what I was doing seemed to be maintenance style play though. Something had happened with the bags to delete my other ones meaning everything was in one large bag and it took a while to organise them all back. I love how this game lets me be a pack hoarder though haha..

I wanted to change my build around as well. My last hindering gun build was fun, but it often didn’t work as well as you want, especially when you faced a lot of those elites as they were immune. This time I was thinking going around one based on penetration as most of my gear already had a bit of this stat on them and I still wanted to be my gun-toting maniac with the look,. And yeh, I could have just looked up a build quite easily but half the fun of TSW for me is pending the time to make these little builds.

I am wondering about getting some of the end-game stuff done now too which is a part of the game I never really got involved with, I was happy just completing missions and listening to the story elements. I never did any of the expert dungeons when I originally played and so my gear is still pretty sub par. I kind of want to get that better gear before I head into Tokyo as well, just to make it a bit easier to complete and get around as I’ve heard it is a lot tougher there and going in as I am now would probably make it more frustrating. I probably wouldn’t enjoy the story as much that way either.

yehhhhhh… I heard that there were a few recent updates to the game and the steady progress after I originally tried it but wow, this game is still terrible. The mission structure is off, the animations and movement are incredibly janky, the ui is cumbersome and unpolished, the menu and elements are barely explained throughout. It is just extremely poorly put together and unpolished and, while they even seem to much up the strategic elements to the gameplay at times. just ugghhh..

and that’s it. Lots planned for the week ahead although not sure what I’m goig to play. Have an urge to play more of an mmo and that’s either going to be ESO, maybe FF14, or possibly back to checking out WoW… no idea.

6 thoughts on “Progress report: Adventures of the Unemployed”