It seems both Tagn and Hardcore Casual have been reviewing their predictions from last year and it was interesting to see how their attempts faired so, why not have a go too. Last year I made a few cheeky predictions regarding the upcoming mmo’s and just how well their pvp experiences were going to be. A lot of stupid thoughts but mostly wrapped in a layer of truth that did have the potential to come true-ish. Well, end of year now so let’s look back a t how I did.

While it did see a fair few of the gw2 WvW crew leaving for greener pastures it wasn’t as many as I thought. I ended up not getting that invested in the game or the PvP, there was something about it that just wasn’t engaging for me. Might have been the skills and combat, maybe the mechanics. A lot to do with the huge quest going for Veteran Ranks. It just never grabbed me.

The group combat was kinda fun.

I believe it still does have a decent AvA population although I can neither confirm or deny that. Haven’t played it in many months. I was right in my snarky comment that a Arenanet would remain as silent as ever about a wvw population that is now but a fraction of its former self.

And the overall message around ESO

The game itself will receive moderate success and will stay subscription based for the remainder of the year. People will complain about how it’s not as good as Skyrim but play it nonetheless since its single player Skyrim with multi-player like they asked.

I would say that’s a decent guess. The fail train ran off the tracks a little earlier than expected but it seems they actually have it back on now and mostly heading in the right direction. Just wondering where the hell this console release is and how well it is going to do.

I think I gave Wildstar far more credit than it was due. I thought it would at least last 6 months yet it only really lasted 1. I was expecting a far bigger population too yet I don’t think it even broke a million sales.

I predict Wildstar will actually steal a sizeable chunk of players from WoW that actually like the game and decide to stay…this is not a considerable amount but enough to perpetuate comparisons about every.. damn… mechanic to WoW every damn day.

I even thought the arena and Warplots would do quite well but the Warplots were buggy and broken and didn’t see much interest and the arena play was a mess. Terrible class balance, buggy, terrible matchmaking, huge power differentials between gear and it was rather unresponsive for many making it’s “action” combat rather annoying. 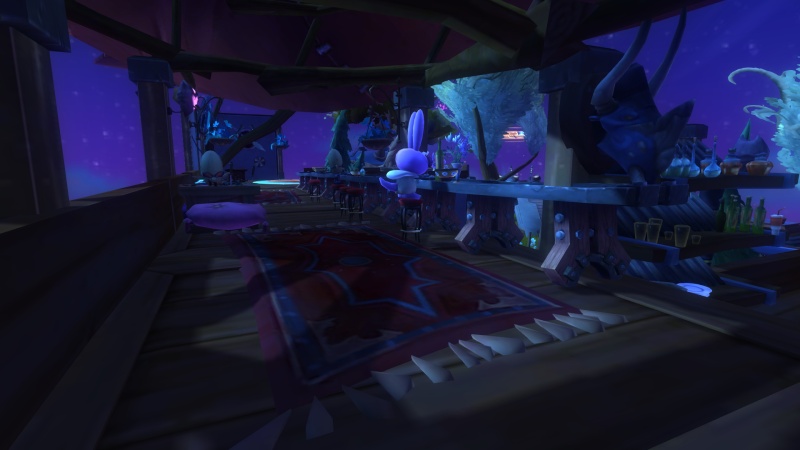 I do miss my plushie bar though

Yep, I predicted its demise over the year and surprisingly it’s still around. It still has no hope of recovering from its death spiral but at least it’s still scamming people for subs. That medieval day z clone still sounds cool, remind me to learn how to code.

I predict EvE will continue to be EvE with no successor and no challenger. CCP will realise they screwed up with Dust 514 but are too worried about their pride to abort this abomination, it’s their baby and they love it nonetheless. The amount of money this hideous love child sucks in will mean World of Darkness will be put on standby with a minimal crew

Sadly I kind of prophesied the demise of World of darkness but I didn’t see the project getting completely shut down. I think the Eve Valkyrie project sucked up a lot of funds too and we heard a lot of reports about ccp basically cannibalising many of the white wolf work force for many Eve projects

No game and very little news about it over the year. No point predicting anything more from the title as I really don’t even see it releasing next year either

So I Thought around 50 million for the year and they have 67, soooo absolutely smashed what I thought. A fool and his money I guess.

Anyway I did kind of suspect that due to the overflowing list of features it’s picked up by hitting so many stretch goals that the game would be severely delayed with only the arena mode making it out half-way through the year… Ding.

Can neither confirm nor deny Chris Roberts having a mental Breakdown though. All I can imagine going on there right now is this

I thought it was going to release near the end of the year but it’s still in a alpha state with beta coming soon. I have been playing a little lately but yeh NDA soooo…. I’d still probably keep the same prediction for next year

I predict The Repopulation will see great success… for a sandbox mmo. It will garner a couple hundred thousand subscribers that will see it out through the new year and be reasonable happy with the game.

I predict they will continue to push out updates and lore stories throughout the year with only minor hiccups. Development progress will be steady but have slight delays. The first trials of the game proper, and not some trial mode of mechanics will be tested by kickstarter supporters around September and it will be a tragically boring affair… an alpha PvP mmo with minimal population doesn’t work. No-one will care how good or bad the alpha tests are and will continue to wait for this messiah mmo to bestow deliverance on us all

Ding. well mostly. It did hit larger delays than expected so we didn’t see alpha. I expected some play of the mechanics though and that’s what we got so far. Basic combat, spells and building but it’s something.

I actually didn’t provide any thoughts in it last year. I had no idea when it would be released and XL games and Trion seemed to be taking there time bringing it here. I would say out of the new mmo’s it actually did the best in terms of PvP play. Open world was fun, the risk reward elements of trading created a fun environment and there were a few other elements there that made it quite addictive. Unfortunately they dun fucked it up. That seriously has to be a skill to have a game that might at least give several months or more of play and kill it in 3… achievement unlocked.

By the power of greyskull

So yeh. A rather shitty year for mmo pvp all round with the big release failing to fulfill their prophecies and the rest of the genre bot doing much else at all. Such fail. Much disappoint. I was rather sceptical anyway and knew they wouldn’t fulfill but I did still have a lot of great experiences so it wasn’t a complete loss.