Project Zomboid and Surviving in Style

This is for all those recently getting Project Zomboid from me, And soon from I has Pc as well (who’s also running a give-away).

It’s a tough game at times and one that often runs counter to how we are used to playing zombie style games. It isn’t the type where you can just go out blind, throwing caution to the wind and aiming for the most zombie kills. It just doesn’t happen like that due to its more, real world, common sense style design.

It’s also a game that has a little depth to it and a lot of systems that interact. A lot of things that are hidden underneath too, like reasons for the mood and their affects on you, or illnesses and the effects of the environment. Overall there is just the overwhelming idea that you are supposed to be taking care of yourself rather than becoming the next Rambo, or saviour of the world.

You’re a survivor but as the splash screen says… this is how you die and that will often be rather quickly. To help that number maybe rise a little bit more I thought to give some handy hints for Surviving the Zombie apocalypse.

Step One… Make a home base.

You can’t carry that much stuff around with you (trust me I tried and broke a leg) and attempting to will mean leaving a lot of useful things behind. It’s good to have a place where you can create a stockpile of goods, tools and other handy things. Later this will also be where you fence off and maybe farm. 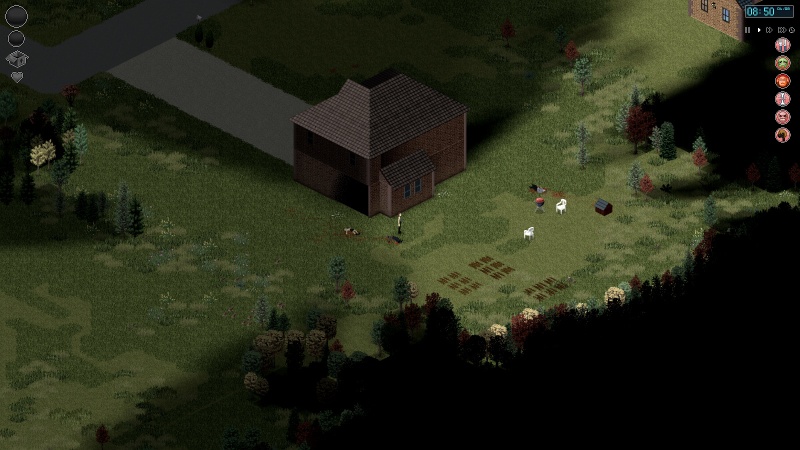 A good spot will usually be a decent house backing onto a forest. This way they are usually more secluded with less Pathing of zombies. It also means a place to forage if you need too. Oh, and if you’re thinking semi long-term then a gas barbecue will help for when the electricity runs out. A lot of people like the large farm in the north woods too as it has a well for endless water.

A two story building is often good too as it gives an alternate, zombie free route to escape. The horde might descend blocking off the bottom area but if you have a cloth rope to throw down you are guaranteed to get out. Also, zombies can’t climb these ropes either so a handy thing to carry round and just leave as a quick entry and exit to any house. You can demolish the inside stairs too meaning no way for zombies to get up if you want to be completely safe while sleeping. 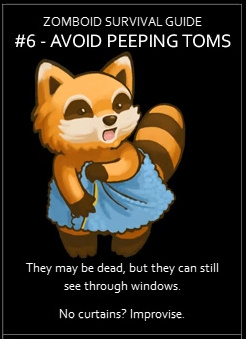 Always look through all the windows first before entering a new house so you can first see if there are any previous occupants. Once clear, check all windows and doors to see if they open first. About half the time something will be unlocked. If not then hold down the E button and it will keep trying and this usually results in an open window after some time. Sometimes not though so smash something to get in, but usually just check out easier houses first as you want to avoid cuts and scrapes from getting in broken windows.

Listen for the sounds as well. Groaning or thumping means zombies nearby. When opening inside doors be ready to swing first and stand back as far as you can. If too many are inside a single room close the door in their ugly faces, you don’t need to check every room and it takes them a long while to break a door.
Which brings me too…

This is a coward’s game. Fighting zombies should be avoided where possible as it only takes a single bite or scrape to get turned. Even if not, infection from wounds is a very real threat as well. Usually it’s good to clear any away from your base area to avoid frights but for the rest of your scavenging try and steer clear if you can.

and be a coward

Watch where you’re walking, look out for bushes and strange noises. Keep looking behind you as well as sometimes they might come out from somewhere unseen and get you from behind… instant bite and probable death right there.

In saying that it’s always good to take out zombies one at a time. If you need to walk through some then, try and lure one away at a time to take out. Some will be faster too so you can walk enough to take a few swings. Aim those swings… wait for them to get in range and also if you land a good hit when they lunge you will knock them over.

Does a zombie falling in a forest make a sound? yes.. it goes splat

ALWAYS DOUBLE TAP… I mean smack those heads in until it won’t swing downwards anymore. They do lunge from the ground too… stupid crawlers, take them from the side.

Run away if you need to BUT running does draw attention so it is best used smartly. Run enough until you can get a decent distance and then break line of sight. Once they can’t see you start walking or sneaking and they’ll usually stop following. Going through already cleared houses when doing this helps as well.

As in real life Happiness = Food

Stockpile a few pots for this, fry pans and trays are good too. For Pot cooking, add water first and then when you mouse over you’ll get a list to add to it to make soup or stew (you’ll need ingredients in main inventory for this). You can add a number of ingredients to this and it only uses a part of an item for cooking so you can get a number of meals out of a single thing. More ingrediants also increase the value of the soup for hunger and happiness. Once cooked the food won’t spoil for much longer as well and, at higher cooking levels you’ll be able to use semi-rotten food without any negative effects.

Pans and trays are much the same but don’t use water, and also might use different ingredients. A number of bowls are good here too as splitting up the food after it’s cooked will satiate for longer, and a tasty healthy meal to carry when scavenging. These are also used to make salads.

Farming will provide lots of fresh produce too. Seedlings are needed and can be opened in order to use. First you’ll need a trowel to till the earth. They also need regular watering which can be done from a number of tools.

Carpentry involves planks and nails to create a range of things. First is probably boarding up the windows a little. Then maybe some fences around your base area, or at least around your vegie garden so it doesn’t get trampled. This does need a lot of lumber though. Chop down trees for logs first, axe is the best but you can also do it with spare frying pans… just takes a while. To make planks you will need a saw though. Both those main tools are usually found in the warehouses, always the logging camp and sometimes in garden sheds and crates. If you can’t find either you can start busting down doors and large fences with whatever you have handy to get a couple planks each time.

Dying with style
Yes, you will be close to death a lot in this game and when you know it’s happening it’s time to gout with style. Usually you’ll see the nauseous and sick indicators after have a figth with a zombie, and a wound that won’t stop bleeding. Burn a house down with a zombie horde inside, use that firearm you’ve been hoarding but too afraid to use. Or just see how many zombies you can attract for that awesome end of game pic.

3 thoughts on “Project Zomboid and Surviving in Style”